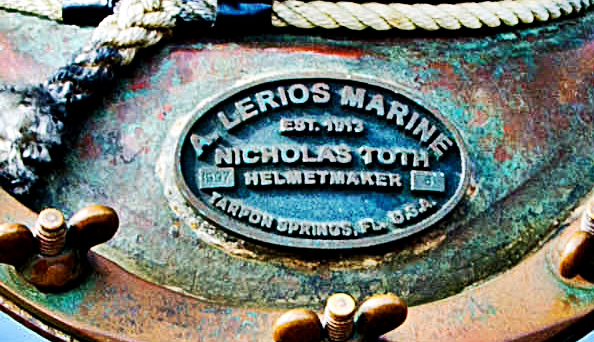 December 10, 2015by adminin Distinctive Posts
TARPON SPRINGS, Fla. — The family clad in Pittsburgh Steelers jerseys watched Nicholas Toth walk by. In his calloused hands, he held a diving helmet he had made from scratch, a 38-pound brass and copper tribute to his grandfather.

In a place populated by the descendants of Greek immigrants, Mr. Toth, 54, carries on the tradition of a family and a town. He is a master maker of diver’s helmets. And here, he is the only one left.

“I’m probably the last person in the world who makes these helmets, one person, beginning to end,” Mr. Toth said. “I make them the old-fashioned way that has been handed down from generation to generation.”

Greek divers arrived here in the 1890s, recruited by an entrepreneur intent on harvesting the sponge beds off the coast. Anthony Lerios arrived in 1913. He found dirt roads and mud streets, pigs and chickens running loose. He considered moving back to Greece.

There he had built steam engines, but here he found his calling. An older man taught him to make helmets for sponge divers, and when that man died, Mr. Lerios took over. The helmets have not changed since the mid-1800s. They are built with brass, copper, leather and quarter-inch plate glass. Mr. Lerios’s grandson, Mr. Toth, was born in 1955. He often followed his grandfather to the sponge exchange, where boat captains held auctions in the town courtyard.

Nicholas Toth, with the diver’s helmet he made in honor of his grandfather. Credit Barton Silverman/The New York Times
After graduating from the University of Florida with a degree in political science, Mr. Toth wanted to go to graduate school and then start a career in law or politics. Instead, he found himself drawn toward home.

Together, Mr. Toth and his grandfather built a booming business, played club soccer in the afternoon and grew as close as two people can. Ten years passed — gone, just like that. Mr. Lerios died in 1992. He was almost 101. For five years, Mr. Toth could not look at helmets, much less make one. He took on jobs fixing boats or houses.

Eventually, he returned to the shop and sat at the machines. “As soon as I started doing it again, I felt him there,” Mr. Toth said. “Everything was flowing. I was an artist again.”

Down by the docks, Mr. Toth pointed to restaurants named after Greek islands like Santorini and Mykonos, places that border the old exchange, which was converted into shops nearly 30 years ago. Some still carry sponge, wool sponge and yellow sponge and grass sponge from the nearby waters.

Divers remain, but in smaller numbers. None of them use Mr. Toth’s helmets. Mr. Toth still sells the occasional helmet, but mostly he makes his living doing odd jobs.

As the population grew and artificial sponge elbowed its way into the market, the town changed from the sponge-diving capital of Florida to a tourist destination. Mr. Toth’s grandfather’s shop, which once attracted divers, has been battered by hurricanes and sits in disrepair. The only way to get in is to crawl under a garage door that does not fully open. Down the street, a once famous tapas restaurant called the Riverside Cafe sits empty.

As the town changed, starting in the 1960s, it clung, like Mr. Toth, to its history. An old sponge-diving boat, built in 1935 from cypress and pine, dominates the square.

Mr. Toth said: “There aren’t too many places like this, in Florida or in the country. The historical value is tremendous. And that’s the charm of it.”

For 14 years, Mr. Diclemente has watched the economy head south. Murals of sponge divers and sponge boats that he once painted for $20,000 now go for $8,000.

“Everyone’s had to downsize,” he said. “Everyone’s losing their jobs. But in this community, everyone’s sticking together, keeping each other alive.”

Mr. Toth believes he can accomplish that by continuing tradition, by building diving helmets the same way his grandfather did.

Building one remains tedious work that requires more than 200 hours spread over two to three months “depending on the helmet gods.” The helmets cost $10,000. Mr. Toth once made five in a single year, but as business declined, so has his production. He views this work as an art form, albeit a dying one. He hopes that it evokes an emotional response; he believes that this is what his grandfather would have wanted.

In 2000, the Library of Congress inducted Mr. Toth and his grandfather into the American Folk Life Center. In 2003, he received the National Heritage Fellowship, the highest honor in the folk and traditional arts field.

“The tradition here acts as the backbone, the spine of this place,” Mr. Toth said. “If you just opened a waterfront with tourist shops, which a lot of places in Florida do, there’s no soul there. The diving tradition, the helmet making, the history that we have, that is the real soul of this city.”

Dark, ominous clouds gathered overhead, as tourists scrambled into the Greek restaurants and shops. Mr. Toth grabbed the helmet from its resting spot on a nearby bench — the first he made after his grandfather died, the one he will never sell. Two tourists stopped and pointed.

“A sponge-diving helmet,” Mr. Toth said. “I’ve been making these for a long time.”